Futura. To some, the devil’s font. But only because Futura is seen everywhere from public safety signs to advertisements. Heck, it even went to space. Futura is a crisp geometric sans-serif typeface that’s great for headlines. Like many great fonts it isn’t free, but there are some great free Web font alternatives to Futura that just might work for your next Web design.

Amazingly, Futura was created way back in 1927 by a fellow named Paul Renner.

For a typeface that’s closing in on it’s 100th anniversary, it sure commands a lot of respect for being as modern today as it was 85 years ago.

But I won’t go on about the past, Wikipedia has done a fine job of describing the history of Futura. 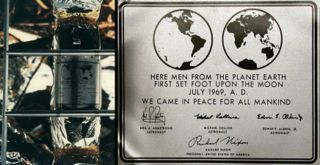 Yeah. The Moon. Beat that, Helvetica.

Before exploring replacements for Futura, I should mention that you can use Futura on your website with the appropriate font stack. If a visitor to your site has Futura installed on their computer, you can take advantage of the situation by setting Futura at the top of your font stack.

Now, it’s important to remember that Futura is a font family. There are several variations on Futura including Futura Light, Futura Book, Futura Medium and Futura Condensed. Not to mention the bold, oblique/italic and extra bold variations. For general use, we’re going to focus on alternatives to Futura Medium, which is probably the most tame of the bunch, and the most similar font to each of the Futura alternatives listed below.

We can start off with a font stack like this, which will use the true Futura font if available on the client’s computer. When you add on the web font alternatives below, just add them to the list directly after the Futura font declarations. (sans-serif should almost always come last.) If you’re determined to have a consistent look in regards to font size, kerning and line spacing, you might opt for using an alternative web font only. Since only a small percentage of visitors will have the actual font installed, it introduces the possibility of inconsistencies in type rendering.

This font stack tries to use Futura or Futura Medium, then falls back to the Century Gothic font family.

I recently explored some web font alternatives to Century Gothic,
which is in a strikingly similar style, so you’re going to find that some of the alternatives here are actually quite similar to the Futura alternatives.

Now that you’ve decided on your base font stack, let’s look at some candidates to replace Futura entirely! These Web fonts are free to use and will render more consistently for a broader range of users than relying on explicitly setting Futura in your CSS font stack.

Open Sans has a few strong differences, such as the a and g style glyphs. Despite these glaring differences, it’s a really nice solid font that has a variety of styles. The great thing is that there are book, normal, bold, italic, semi bold and extra bold variations (if only there was a light version!):

A reasonable alternative to Futura Condensed when in a pinch, which is awfully popular for headlines and page titles. Comes in book and bold:

Didact Gothic is probably the closest replacement of the bunch. It can easily replace Futura Book or Futura Medium, again very similar to Century Gothic as a clean geometric typeface:

Last but not least, Muli is yet another appealing geometric replacement for Futura Regular and Futura Book:

If you really must have Futura and need a Web font, Adobe Typekit introduced Futura PT and Futura PT Condensed in 2001. If you’re a TypeKit subscriber you’re in luck because you can use these fonts on your website by adding them to your kit!

If you are using an alternative font for Futura that isn’t listed here, please share in the comments section below. I hope these Futura replacements help you with your next Web design or Web app!

Gabe is the owner and founder of Intavant, and contributes to Intavant Blog regularly with his expertise in design, development & business.

Request a Quote on Your Next Project

Complete a quick, hassle-free quote request and see what we can do for you.